I have been asked numerous questions since returning from The IBFAN World Breastfeeding Conference in Rio de Janiero, the top one being ‘who paid for you to go’?  There is a perception out there that if you go abroad to a conference to somewhere faraway, someone else must be picking up the tab.  The answer in my case is ‘no-one’ – except me!  ALCI offered the usual bursary of €200 which I readily agreed to! So why did I go?

Number one was that I may not have the opportunity to visit this stunning city in the near future and as I would know a lot of others travelling it would not seem so daunting to take off on a 15-hour flight.  Amal Omer-Salim from WABA was on the flight as were my other Irish compadres, Ger Cahill and Fiona Rea.  We had discussed the possibility at ILCA in July and as time marched on we just decided to go.  This conference is all about Policy so is not for the faint hearted. There is no actual clinical Breastfeeding content – it’s all about protecting and sustaining breastfeeding, developing policy and monitoring the activities of the multi nationals and their allies around the globe.

So what was the conference about?  There were three events rolled into one – a local Brazilian Breastfeeding Policy Conference, The Unicef WHO World Breastfeeding Congress and the 1st Complementary Feeding Conference in the World.  It was this that particularly attracted me plus the number of sessions that were translated into English. We met up with Mudiwah Kadeshe and Jeanette McCullough from ILCA who were there to meet all IBCLCs present and we had a very productive lunchtime meeting sharing experiences from our many differing countries.  We also met up with the three representatives from ELACTA Council and discussed the forthcoming Milan Conference.

The pre-conference session I had been invited to attend as an Irish representative was on WBTi – World Breastfeeding Trends initiative.  This was a full day training on implementing the WBTi from those already working in this area.  The rest of us were there to observe and listen to their experiences.  I was familiar with this as had been in conversation with Lactation Consultants of Great Britain (LCGB) representatives at other meetings during the year. What is interesting about this Initiative is that we (and other countries) can use statistics already available through their national CSO ( Central Statistics Office) and in our case, the HSE as well.

It does not involve gathering more statistics or plaguing already overstretched hospital administrators seeking information.  The usual difficulties are present – are we collecting the same data?  What constitutes exclusive breastfeeding?, who gathers statistics from the community after the early PHN visits?  These are all challenges that Ireland has to address and as yet we have not submitted anything to WBTi.  I know there are others working on this and for that reason I declined to undertake any further work in this area, coupled with the fact that I already am in full time employment.

It was an interesting day with Arun Kumar and others presenting on findings from other countries. The majority of attendees were doctors or statisticians from South America, Africa and Asia who had some familiarity with the programme. New friends were made, old friendships renewed and respectful communication was the order of the day.

So to the conference proper: Dr Lawrence Grummer-Strawn from WHO is an excellent speaker on a range of subjects affecting child health. Dr. Grummer-Strawn is widely known in the breastfeeding research and advocacy communities, serving as scientific editor of the Surgeon General’s Call to Action on Breastfeeding. I have had the pleasure of hearing him speak on several occasions.  His presentation on the revised Ten Steps was an eye opener.  For those who are not familiar with the changes, the major one is that Step 1 now has three sub-sections- 1a, 1b and 1c.  For many of the countries represented this was causing somewhat of a stumbling clock because Step 1a requires full adoption of the WHO Code of Marketing in order to embark on BFHI assessment. We discussed the European Regulations and it was felt that they were too weak and we were encouraged to go back to our home countries and push for stronger legislation to protect the health of infants by strong regulation of products within the scope of the Code. He reminded us that it is governments that have a responsibility to legislate and those who are activists need to keep after them.

Under the revised Ten Steps the first two come under the heading of  Critical management procedures.  They are as follows:

1a. Comply fully with the International Code of Marketing of Breast-milk Substitutes and relevant World Health Assembly resolutions.

1b. Have a written infant feeding policy that is routinely communicated to staff and parents.

‘Key Clinical Practices’ 3 to 10 as they were clinical practices

There were so many areas that I could have chosen to cover, however the Complementary Feeding talks really took my interest.  We look at processed foods, and ultra processed foods and the potential link to lifelong obesity.  Many of you will be familiar with Dr Helen Crawley’s work in First Steps Nutrition.  Well this was more of the same but much more scary in terms of what our weaning infants are being fed across the globe.  Firstly some startling statistics:

This figure is rising year on year. There were a number of speakers addressing this topic from many angles.

The most interesting nugget I picked up was that when foods are ultra processed they do not create satiety so the infant doesn’t have satiety cues so over eats. Because they don’t feel full they then get fed more.  We looked at why parents world wide are persuaded that commercially prepared foods are better than home prepared.  It often comes down to the word ‘organic’.  It’s organic so it must be better.  Of the seven countries surveyed our neighbours in the UK have a prevalence of 57% of toddler foods being either processed or ultra processed.  The categories shown in the slide are in order:

So many countries have inappropriate feeding of complementary foods and the obesity epidemic can be linked to this, and to not breastfeeding as the obesity rate declines with duration of breastfeeding.

Advertising plays a key role in the persuasion of parents to pay over the odds for foods that are poor nutritional quality.  We were shown examples of large multi nationals creating doubt in the minds of parents as to the nutritional adequacy  of regular family foods, creating confusion about pesticide residue in home grown products, and other dodgy tactics. The speakers’ closing words were ‘ The only thing that needs to be done to food for it to be suitable for toddlers is to either peel it , or lightly cook it’! 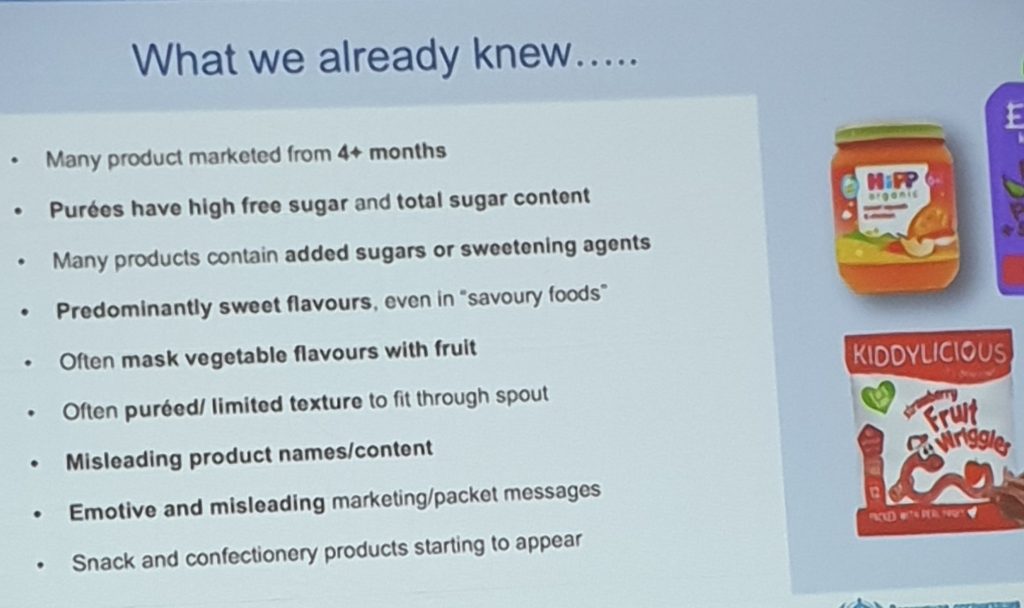 Patti Rundall from Baby Milk Action also spoke on the topic of unethical practices by large corporations and inappropriate tie-ups between food production and Health Depts in many countries. We are all too familiar with this in Ireland. Certain Cereals being associated with fundraising campaigns for really worthy causes, inappropriate sponsorship of local events, and hijacking legitimate government sponsored initiatives like the first 1000 days.

So what can we do:

The 4th International breastfeeding Congress will be held in Egypt in 2021.  Do I plan to be there  –  and to quote the inimitable Elizabeth J Brooks – Hell, YES!

Sue received a bursary of €200 from ALCI to attend the IBFAN World Breastfeeding Conference.

These are little ‘tit’ bits of information that I picked up while listening to sessions, or chatting with colleagues during meal times or between sessions.

This was an interesting finding from Kair L.R., Colaizy TT  whose objectives were to examine the extent to which a mother’s pre-pregnancy body mass index (BMI) category is associated with her exposure to pro-breastfeeding hospital practices. They found that mothers with a pre-pregnancy BMI >30 were less likely to initiate breastfeeding in the first hour, breastfeed exclusively, get breastfeeding support reference in the community on discharge and use a *pacifier more often than mothers with a BMI of less than 30.

CONCLUSIONS: Obesity stigma may be a determinant of breastfeeding outcomes for obese mothers. Breastfeeding support should be improved for this at-risk population.

*As it’s an American Study pacifier not soother is the word of choice.

Looking at the engagement of the baby in the pelvis, Carol used the term ‘fixation‘ rather than ‘engagement’ and challenged us to not always see engagement as a good thing. She looked at how for the babies that are locked from early on can have a difficult journey down the birth canal and subsequently present with feeding issues brought about by prolonged fixation in utero.

Glucose uptake by the brain is disrupted at birth. As the Late-Preterm (LPT) Infant has a greater need for glucose to promote continuing rapid growth of its brain, the need for energy is therefore higher than in the term infant. So glucose is pulled from stored fat resulting in large weight loss, low blood sugar and poor temperature control.

Immaturity affects breastfeeding due to poor myelination of nerve cells, meaning poor transmission of signals to and from the brain.

Alterations in the brains of LPT Infants persist over many months and can be measured even years later.